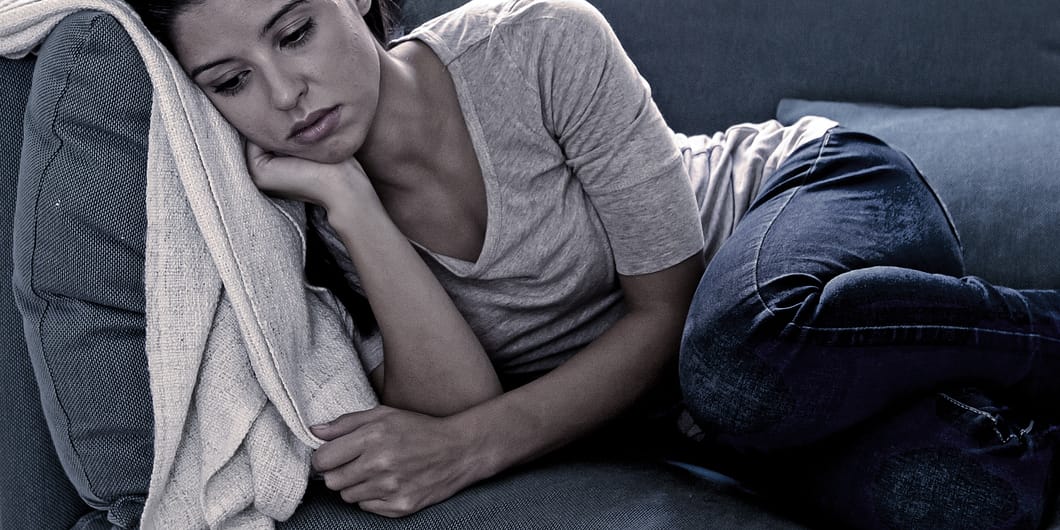 Dysthymic Disorder is a low-grade and yet chronic depression characterized by feelings of sadness or depression associated with lack of interest to do things and including some physical symptoms such as lack of energy, sleep, and concentration.

This is a type of clinical depression that is supposed to be "milder" than Major Depressive Disorder because the symptoms don't necessarily happen every day. Unlike patients who suffer from MDD, Dysthymic patients are not bed-bound, still able to work, and do not appear to be sick. But most of these individuals complain that they haven't felt "normal" or "happy" for a long time.

Moreover, Dysthymic Disorder shows itself by lack of drive and motivation. Hence, relatives and friends tend to misinterpret the person's mood. Some patients endure the stigma of being considered "lazy" or not "motivated enough" to do worthwhile goals.

As time passes by, patients with this disorder have difficulty functioning. But because they still appear normal, the illness is not recognized, and patients don't get treated early. A lot of times, they are not referred to a psychiatrist.

So Dysthymic Disorder is a serious health problem that should be recognized and treated promptly. It is an illness that somehow hides its existence from everyone including clinicians and patients themselves.

Dysthymic disorder can be treated by antidepressants and psychotherapy. Most patients respond to treatment although some still suffer despite adequate treatment. Also, there are some individuals who only respond minimally. As such, this illness can be more challenging to treat than others.

Today I want to talk to you about Dysthymia.

And what do we do if we have it?

So stay tuned. So like I said, Today I'm going to talk to you about Dysthymia.

In the DSM 5, they changed the name to be Persistent Depressive Disorder.

But the symptoms aren't any different. And the diagnostic criteria hasn't changed.

So whatever we call it, it's still the same diagnosis. And for my benefit. I'm going to call it Dysthymia. Because that's what I went to school and you know we called it that.

I was studying for my exams, we called it that. So, today I am going to talk to you about Dysthymia. I know many of you have reached out and said that you have that diagnosis and what makes Dysthymia different from Major Depressive Disorder.

Is that Dysthymia is a little bit of a lower grade depression. That goes on for a really long period of time. In order to get the diagnosis.

You have to have had this depression for at least two years. If you are a child, one year. And the symptoms can't go away. Or subside for more than two months at a time. So you can see how hard this could be to have.

Because what that means is that you are feeling down and gloomy. You're not enjoying your activities like you used to. For a really long period of time. And often, I find my clients who struggle with this. Will even report back to me about different situations. Or maybe occasions and celebrations they were a part of.

And they will just kind of talk about them like they were gloomy days. It wasn't that great. Oh, it was okay. Nothing gets them really excited. And the thing that I really want to talk with you most about. More so than the diagnostic criteria.

Because it's similar to that of depression. Is get help for it sooner rather than later. I find people who struggle with Dysthymia, Have been, they had this low-grade depression for years and years and years. Before they ever talk to someone.

And another fact I found is that, it's almost 15 years for some people, By the time that they get the help that they actually needed. And that's why sharing these videos is so important. Because the sooner we can reach out to people.

The sooner people reach out for help. The sooner they can feel better. We can get the support that we need. Because depression is a serious thing. Dysthymia is a serious diagnosis. And the way that you would know if you are struggling with it. Is if you have some of these symptoms that I will tell you about. The number one, and the most important to notice Is a loss of interest in things that you used to enjoy. I called it in my other video, anhedonia. Because that's the term that we use in the therapy world.

But it really just means that you don't like things that you used to like. Like I have a couple of clients who used to love to paint or sing. And they are just not doing it anymore. Because it just doesn't bring them the joy it used to.

Notice that that's happening to you. Speak up. Reach out for help. Another way to notice it if you have a loss of appetite. Or maybe an increased appetite. Can also not sleep at all, you struggle to sleep. Or you may want to sleep all day long. And never want to get out of bed. Getting out of bed is like the hardest thing you've ever had to do. Everybody experiences this differently. But if you are noticing shifts in your behaviour, and your enjoyment of life.

If you are just feeling really hopeless and gloomy. If your confidence is kind of just going down. Notice these things. Because it could be a sign or a symptom of something bigger. And the sooner we can get diagnosed. The better the outcome. Right. Now the one differentiation I want to make.

Is when we are adults. It's those symptoms that I was just talking about. That's how we diagnose it. We may not enjoy things. We struggle to sleep. Or we sleep too much. We eat too little. Or we eat too much. All of those things. Now if we are a child. We are under 18. It tends to represent itself more in the irritability component and lashing out. A lot of people say that it goes hand in hand with ADD or ADHD diagnosis.

Everybody else around you is seeming to have, you know, Being hunky dory, everything's good. It would feel kind of bad, right. And so the thing that's important to remember is, With children, it goes on undiagnosed a lot. They say it's ADD or ADHD. They don't look further. They don't find out if they are feeling hopeless. Or they are feeling down. They don't ask them about it.

Because it presents itself differently. So know that if you are having those symptoms. And you're a child. It's not like the adult. It could be the same thing. It's okay to reach out for help. It's okay to ask your doctor if maybe it's something else.

If they have already diagnosed you as ADD. And they have kind of pushed it off. and you just have a prescription you fill every month. Or whatever. It's okay to ask again. The thing about Dysthymia that bothers me the most. Is that it goes undiagnosed. And untreated for years. So if you find yourself struggling with this.

Because of the most important thing with my clients. I don't want them to lose sight of who they are. And how things used to be. How great things can be in the future. Because you can get there too. Don't forget to subscribe to my channel. I put out videos five days a week. And you don't want to miss them.

Right. And also leave your comments below. I'm always reading through those. If you have any feedback or any videos you'd like me to make.