Exhibitionism occurs when a man gives way to an urge to expose his genitals to a female stranger or a person with whom he is not in a close relationship. It is an almost solely male disorder and is one of the most familiar forms of sexual deviation.

In a sexual context, exhibitionism is a sexual kink in which the person feels sexual arousal at the idea or reality of being seen naked or engaged in sexual activities by others,” says clinical sexologist Sarah Melancon, in the Cosmopolitan

1: A perversion in which sexual gratification is obtained from the indecent exposure of one’s genitals (as to a stranger)

2: The act or practice of behaving to attract attention to oneself 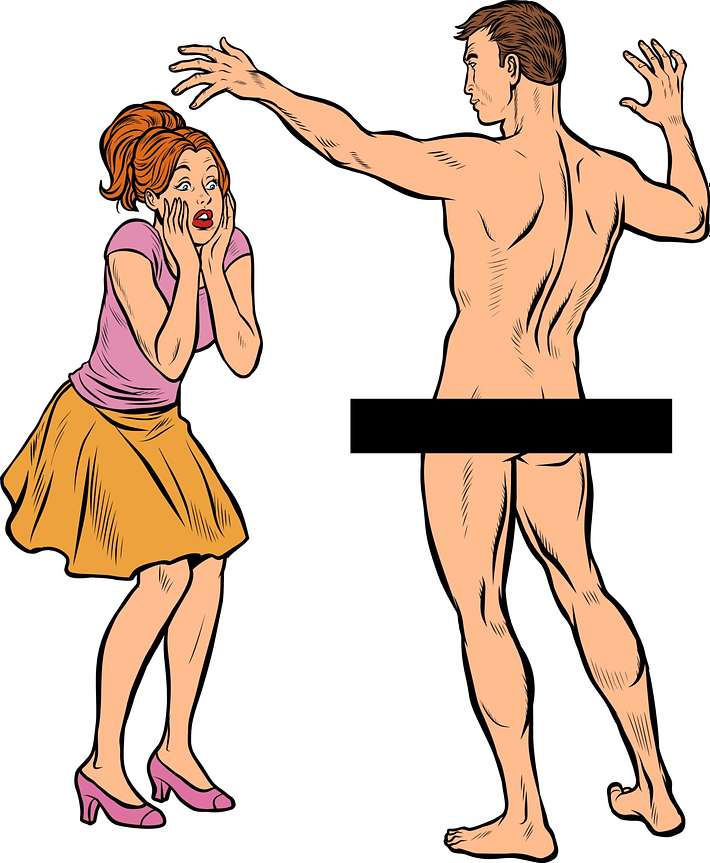 The mental health condition is known as an exhibitionist disorder, which involves deriving, "recurrent and intense sexual arousal" from the exposure of one's genitals to an unsuspecting person.

About 30% of male sex offenders who are arrested are exhibitionists. They tend to persist in their behaviour. About 20 to 50% are re-arrested.

Female exhibitionism is relatively rare and is allowed outlets in society. It rarely takes a deviant form.

Men who practice exhibi­tionism tend not to have a normal sex life and feel the need to assert their masculinity by displaying their manhood, preferably erect, and then eliciting an emotional reaction from the victim.

Some men turn to exhibitionism due to severe psychological trauma or grief, but this is rare.  Persistent exhibitionists nearly always have a personality disorder arising from some form of inadequacy.

It is said that most exhibitionists are married, but their marriage is often troubled. They looked on their wives as mother substitutes and remained abnormally attached to their mothers in child­hood.

Exhibitionism usually starts during adolescence. The exhibitionist, although sexually infan­tile, may in other respects be a remarkably normal, capable, well-educated and presentable person, often with ostensibly high moral standards. 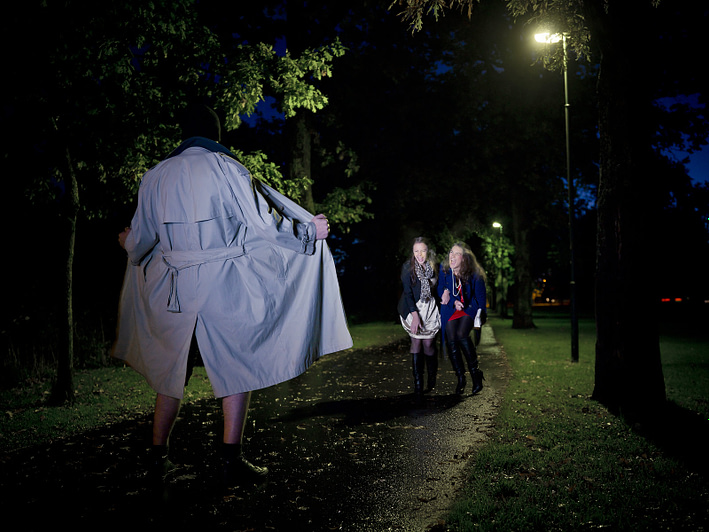 In some cases, the disor­der arises from brain damage, substance abuse and older men with senile or alcoholic dementia.  Some have severe epilepsy; or abnormal patterns of electrical activity in the brain as measured on an EEG (electroencephalogram), but without seizures.

Some have abnormal hormone levels, and a few are mentally retarded. The great majority, however, do not suffer from any organic disorder. Most exhibitionists adopt a set pattern of exposure, occurring at a particular type of place and often at a specific time of day or night.

Cine­mas and theatre seats are popular, as are parked cars or secluded areas that provide them with cover before the act of exposure. Exhibitionists will frequently choose a particular site, such as one close to a girls’ school.

How is exhibitionism treated?

Psychotherapy (with a mixture of counselling and behaviour therapy), undertaken by a health­care professional, enables the man in ques­tion to understand what lies behind his problem, regain his self-esteem, and discover socially accept­able ways of achieving sexual gratification.

How should I react to exhibitionism?

If you are the victim of unwanted exhibitionism:

1. Stay calm and try not to display emotion.

2. Indicate that you are about to report the matter to the police and walk away.

3. If possible, make for a well-lit area where other people are around.

How does the law deal with exhibitionism?

In general, the law regards a person as responsible for their actions and the consequences of it. Exhibitionism is defined legally as the offence of indecent exposure.

When the exposure goes well beyond the generally accepted standards of decency, and at least two people could have seen it, it is an offence under the common law, even if no one chooses to object.

Suppose a man exposes his genitals to a woman, in public or private, intending to cause her distress or insult. In that case, he may be guilty of a statu­tory offence and liable to be sentenced to a term of imprisonment. If his behaviour is deemed threatening or frightening at the same time, his crime may also amount to an indecent assault.

This is a more serious offence, punishable by up to two years’ imprisonment.However, courts allow for changing social attitudes to exposure of the body and may take a more lenient view than they might have done in earlier times.

They are also aware that, in some cases, there may be an element of diminished responsibil­ity on account of a medical or psychological disorder. For this reason, some men, when convicted, may be remanded for the opinion of a psychiatrist before sentencing or even be ordered to undergo psychiatric treatment.

Exhibitionists are seldom dangerous, and it is sporadic for a sexual assault or other forms of violence to follow the exposure. Occasionally, exhibitionism is a sign of general hostil­ity to women, but such cases are the exception.

The danger to the exhibitionist is, of course, that he is at serious risk of criminal prosecution.

To psychologists, exhibition­ism comes under the term paraphilia, which covers many unusual sexual practices such as incest, masochism and voyeurism.

How is exhibitionism different from voyeurism?

The two go hand-in-hand. “A voyeur is someone who feels sexual arousal and pleasure by watching someone else nude or doing sexual activities. The fantasy of exhibitionism requires a voyeur—it is a relationship between the “see-er” and the “see-ee,” says Melancon. So while you don’t necessarily need a partner to consider yourself a voyeur or exhibitionist, the two kind of thrive off of each other’s pleasures.

Risk factors for exhibiting exhibitionistic disorder in males include antisocial personality disorder, alcohol abuse, and interest in paedophilia. Other factors associated with exhibitionism include sexual and emotional abuse during childhood or sexual preoccupation throughout their  youth.

The exhibitionistic disorder involves them acting on exhibitionist urges or fantasies or being distressed to the point they are unable to function normally because of those urges and fantasies.

Exhibitionistic Disorder: have negative implications for the individual, causing feelings of shame, guilt, and other emotional turmoil with social isolation. They may have trouble communicating in a relationship, and their sexual partners also go through emotional distress.

Exhibitionists may have a coexisting personality disorder (usually antisocial) or conduct disorder.

Exhibitionism is a form of paraphilia.

Paraphilias are frequent, intense, sexually arousing fantasies or behaviours that involve inanimate objects, children or non-consenting adults, or suffering or humiliation of oneself or the other partner.

Paraphiliac disorders are paraphilias that cause distress or cause problems functioning in the person with the paraphilia or may harm another person.

Sexual sadism is a form of paraphilia. Most people with sadistic tendencies do not have sexual sadism disorder.

Some amount of sadism and masochism is commonly play-acted in healthy sexual relationships, and mutually compatible partners often seek one another out.

For example, the use of silk handkerchiefs for simulated bondage and mild spanking during sexual activity are common practices between consenting partners and are not considered sadomasochistic.

The impact of social isolation and loneliness on your mental health

How To Improve Your Mental Health With Positive Thinking.