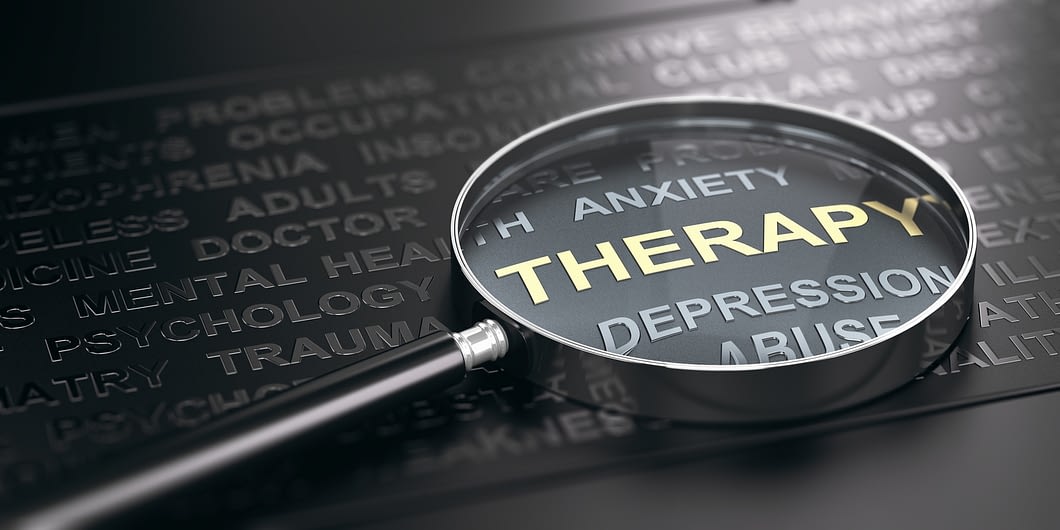 If you believe someone you know is displaying a change in behaviour or mood which you feel may be potential red flags of poor mental health/mental illness.  Many people have mental health concerns from time to time.

But a mental health concern, then becomes a mental illness when ongoing signs and symptoms affect your ability to function independently.

Anxiety disorders are the most common mental illness in the U.S., affecting 40 million adults in the United States age 18 and older, or 18.1% of the population every year.

Biologically speaking, anxiety is a triggering of the fight or flight response to prepare us mentally and physically to deal with a perceived threat. It is believed to have evolved to keep us safe and in Palaeolithic times, anxiety was crucial to our survival to protect ourselves from the many dangers in the wild.

At any sign of danger, our body's sympathetic nervous system was activated due to a sudden release of stress hormones, including adrenaline and noradrenaline, boosting oxygen to our limbs that allowed us to flee from danger.

This 'fight or flight' response resulted in an increase in heart rate, blood pressure, and breathing rate, which left us trembling.

However, whilst our world has changed around us, and we no longer need to be on our guard from say, wild animals and human enemies, we still remain hard-wired to protect ourselves.

However, Anxiety disorders, keep us on a permanent high alert and prompt us to feel panic and fear at ordinary, everyday events. Psychologically, they set off a sense of dread and alarm; physically, they speed our hearts and pulses, makes us sweat, shake, or feel dizzy with worry.

Anxiety disorders include generalised anxiety disorder (GAD), social anxiety and panic attacks, all of which can impact an individual's life.

Panic disorder is an anxiety disorder where you regularly have sudden attacks of panic or fear. A panic attack is a sudden rush of intense mental and physical symptoms, lasting between five and 20 minutes.  Sufferers are left feeling frightened and distressed, often reporting they thought they were dying.

Successful treatments for anxiety include therapy, medications such as beta-blockers, and making life changes.

Phobias are a type of anxiety disorder characterised by the fear of a specific object or situation. 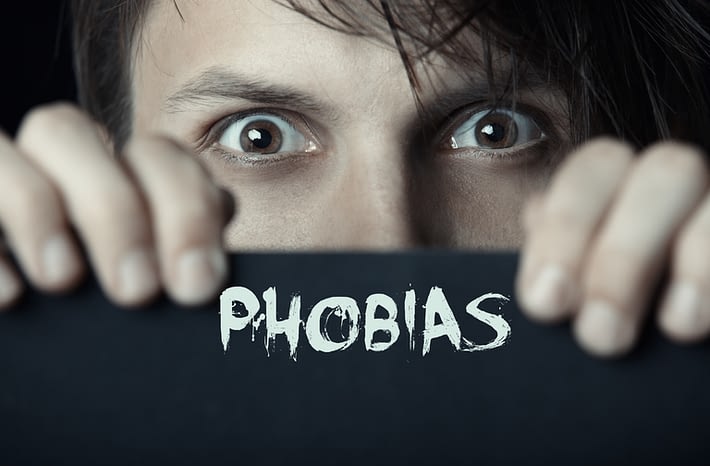 They fall into three types:

Even though most people with phobias know that logically their fears are irrational, this does not assuage the panic, sweating, terror, breathlessness, dizziness or even fainting that experiencing the feared object or situation triggers.

Whilst some phobias, such as the fear of spiders, may have an evolutionary background that once kept us safe in the wild, others are believed to be the result of a stressful episode that the brain remembers and reacts to again and some could simply be learned from a phobic parent.

Treatment generally involves controlled desensitisation to the fear and repeat exposure to it, although medication may also be prescribed to help reduce anxiety.

Depression isn't just feeling a bit fed up for a while. It's when that flat mood continues over several days or keeps returning, that it then becomes a chronic concern. Whilst it might begin with a vague sense of sadness, it infringes on everything, depleting our passion for life.

We lose interest in the things we enjoyed. We may not sleep well. We may be restless, anxious or lethargic. We may withdraw from others or rely more on pick-me-ups such as alcohol or comfort foods.

At worst, we might self-harm or have suicidal thoughts. Suicide is now the second most common cause of death among 15 to 29-year-olds. 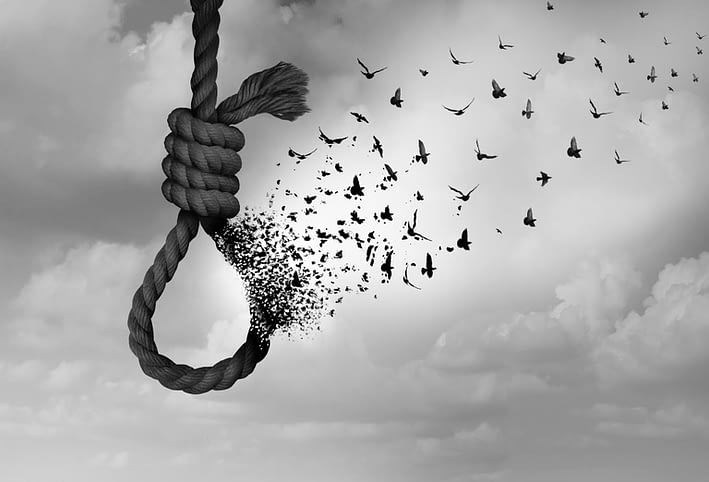 A traumatic event can trigger depression, experiences in childhood, other mental or physical problems - or sometimes, none of these.

Treatment is usually a combination of therapy and medication.

Therapies include cognitive behavioural therapy (CBT), which aims to challenge the thinking that underlies depression.

Antidepressants offer a pharmacological treatment that alters the brain's chemistry. These medications can take two to four weeks before their effect builds up, and up to eight weeks to work fully.

whilst drugs alter brain chemistry, often by elevating the amount of the feel-good hormone serotonin we have in our body.

However, it must be said that these changes can be more challenging to implement for those with depression. 'Talking therapy'  means speaking in confidence to a mental health professional. This can range from counselling and psychotherapy to cognitive behavioural therapy (CBT).

These conditions are not merely low moods or feeling worried, but can leave sufferers crippled by an onslaught of psychological, physical and social symptoms. According to an NHS survey (2014), around 3.3% of people in the UK aged 16 and above experienced feelings of depression in the past week.

Depression causes loss of interest or pleasure, feelings of guilt or low self-worth, disturbed sleep or appetite, low energy and poor concentration.  There is an increased risk of depression if you have a long-standing or life-threatening illness, such as heart disease, back pain or cancer.

Anxiety differs from depression in that it's a typical response to stress, experienced by all of us when difficulties arise. Researchers are now discovering that anxiety disorders run in families, and are likely to have a biological basis.

The treatments for these anxiety disorders are similar to depression, i.e. talking therapies and medication. Group therapy has also been found to be particularly useful for anxiety sufferers. Again, lifestyle changes can be helpful, too.

For example, a 2014 study of 150 participants with mild to moderate depressive symptoms were randomly assigned to a mindfulness-based intervention or to a waiting list (Control / Placebo group).

Significant reductions in depression, anxiety, and experiential avoidance, and improvements in mindfulness and emotional/psychological mental health occurred for the group that received the mindfulness-based intervention.

Cultivating a gratitude practice (a strength-based positive intervention) can boost happiness and alleviate depression by focusing on positive aspects of life today and in the past.

Expert opinions say that these techniques shift our thinking from adverse outcomes to positive ones, elicit a surge of feel-good hormones like dopamine, serotonin and oxytocin, and build enduring personal connections.

Finally, and most controversially, cannabidiol (or CBD) is a natural compound with a growing body of research into its potential health benefits, which may include treating depression and anxiety.

CBD is one of more than 100 compounds occurring naturally in the cannabis plant called cannabinoids.

Unable to shrug off the thoughts, the person feels compelled to carry out particular behaviours, rituals or ruminations, to reduce their overwhelming anxiety and 'ensure' the safety of themselves and others.

Whilst the compulsions generally bring about temporary relief, they reinforce the OCD cycle. People with OCD can feel embarrassed about their condition, which delays their asking for help, sometimes for many years.

Additionally, the media's portrayal of OCD as rather comical is further isolating the individual. Because, OCD is not a topic for humiliation and isn't funny. It shrinks people's worlds and can leave them in a continuous state of fear and anxiety.

Successful treatments include cognitive behavioural therapy (CBT) and acceptance and commitment therapy (ACT) - which help change the individual's reactions to the obsessive thoughts - and anti-anxiety medication.

Post-traumatic stress disorder (PTSD) is the name given to the psychological fall-out from experiencing a horrific event. Originally associated with combat, the term for this condition was coined following the diagnoses of many Vietnam veterans.

In the early 20th century, it was known as 'shell shock'. However, PTSD is a condition that may arise from any psychologically distressing ordeal with trauma, such as being involved in an accident, terrorist incident, rape, assault, or grief.

It can also occur from a long-term stressor, such as childhood abuse. Someone with Post-traumatic stress disorder  may experience vivid flashbacks, nightmares, extreme alertness and intrusive images.

They may be hypervigilant, easily startled and likely to experience panic and distress at any reminders of the original traumatic event.

Additionally, they can blame themselves for what happened and endure feelings of shame, anxiety and guilt. Treatments for PTSD include trauma-focused cognitive behavioural therapy (TFCBT) and eye movement desensitisation and reprocessing (EMDR), which aims to use eye movement to help the brain reprocess the disturbing memories.

Addiction is defined as "not having control" over doing, taking or using something to the point where it could be harmful to you. Common habits include food, alcohol, nicotine, gambling and drugs, but people can become addicted to other things too, like shopping or extreme sports.

The addiction feels rewarding in itself but engaging in it also increases the likelihood of repeating it again and again. Often, the short-term high from the behaviour leads to long-term problems such as money troubles from gambling or liver cirrhosis from alcohol.

Breaking away from the habit is difficult and can lead to withdrawal symptoms.  In some circumstances, this can place the individual at greater risk, concerning their physical and mental health.

Unlike some mental health conditions, addiction has a wide impact on families, friends and the larger community and comprises a large part of the National Health Service (NHS's) work.

However, the good news is that addiction is treatable, and from GPs to charities such as Action on Addiction, help is available and successful.

Causes of Anxiety within intimate relationships